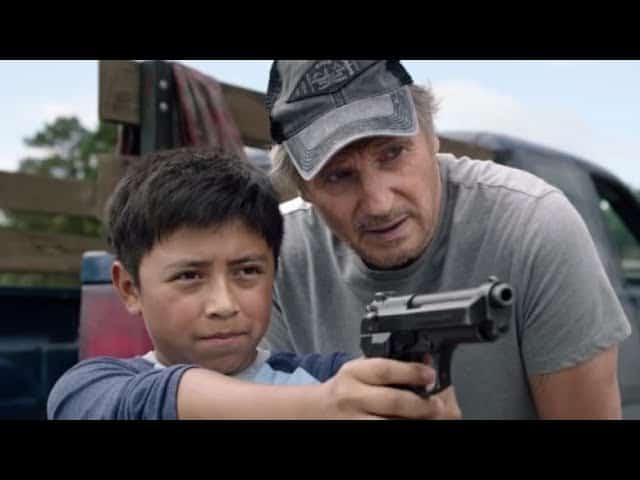 [The Marksman] Former-United States Marine Corps Scout Sniper and Vietnam war veteran Jim Hanson lives along the Arizona-Mexico border, reporting attempted illegal crossings. One day, while on patrol, he encounters Rosa and her son Miguel, Mexican citizens on the run from the cartel.

Hanson calls border patrol on them before he sees the cartel coming up. He ends the call and gets involved in a shootout with the cartel led by Mauricio. Hanson shoots and kills Mauricio’s brother; Rosa is fatally wounded by one of the cartel members. Before she passes, she gave Hanson a note that listed her family’s address in Chicago. Hanson reluctantly agrees to take Miguel to her family in Chicago.

Border patrol show up after her death and take in Miguel. One of the cartel members comes in and claims that he’s the father of Miguel. Hanson happens to see their car there and sneaks Miguel out to go to Chicago.

The cartel use fake passports to get into America to follow Hanson and Miguel. A corrupt border patrol officer sees their gang tattoos, recognizes that the passports are fake, and allows them in anyway.

After Hanson uses his credit card to repair his truck, Mauricio tracks the pair to Route 66 in Oklahoma. A corrupt cop follows Hanson and Miguel and pulls them over after they found out where they were. The cop tells Hanson to get in the police vehicle while he “goes and talks to the boy”.

The cop takes Hanson’s driver’s license and keys and searches his pickup truck, but never actually talks to Miguel. Realizing the officer is corrupt, Hanson escapes from the police car, subdues the officer and retrieves his keys. A short while later, Mauricio and the rest of the cartel catch up with the corrupt officer and execute him while Hanson and Miguel watch from a distance.

Hanson and Miguel continue to make their way north. Despite Hanson’s personal lack of faith, they stop at a church so that Miguel can have a proper send off for Rosa.

The patch on the truck’s radiator fails while attempting to get away from the cartel and they are forced to stop. Eventually Mauricio and his men catch up to Hanson and a firefight breaks out on a nearby farm. Hanson manages to kill three of the cartel members, but Mauricio captures Miguel.

After a skirmish in which Hanson is stabbed, he manages to get the upper-hand on Mauricio, and leaves him with a single bullet in his gun with the choice to kill himself or return home to Mexico. As Hanson and Miguel leave the farm, they hear a gunshot.

The pair eventually reach Miguel’s family in Chicago, and ends with Hanson getting on a city bus. Realizing he’s been fatally wounded, he finally closes his eyes and dies.