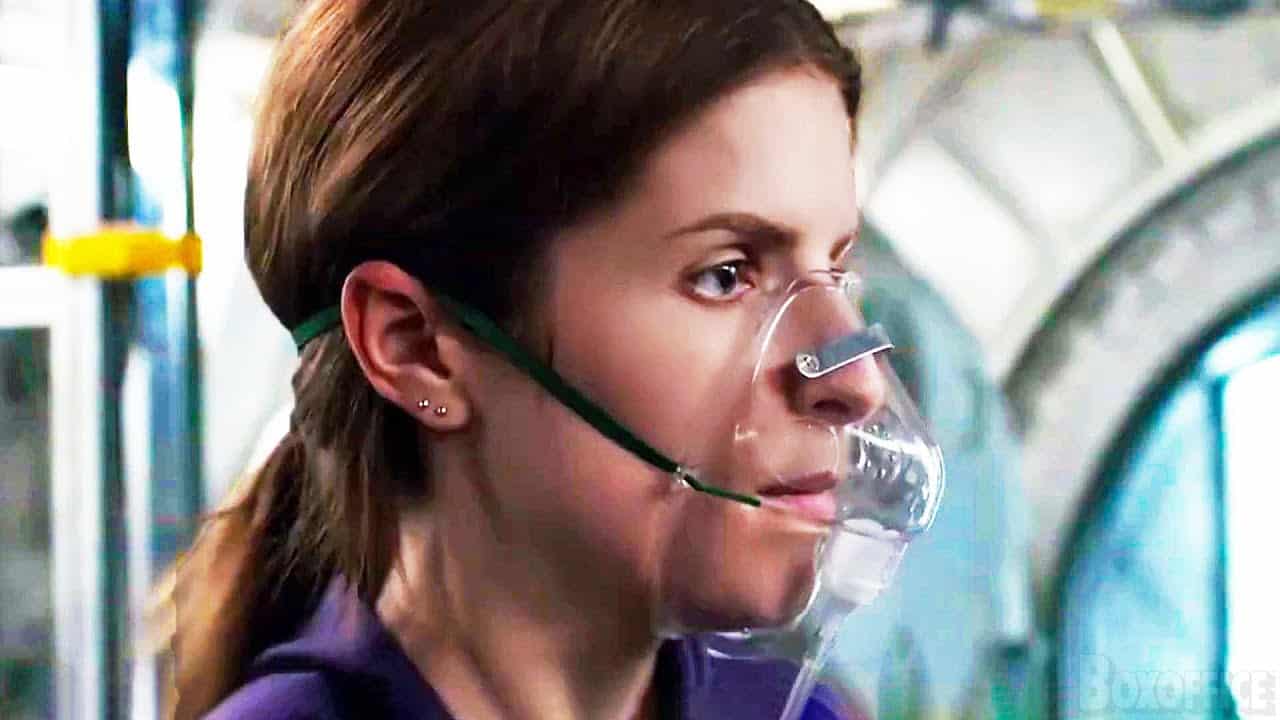 [Stowaway] The crew of a spaceship on a two-year mission to Mars consists of captain Marina Barnett, biologist David Kim, and medical researcher Zoe Levenson. After taking off from Earth, the upper stage of their launch vehicle is tethered to the ship’s main hull to act as a counterweight for inertia-based artificial gravity.

Shortly after takeoff, Barnett discovers launch support engineer Michael Adams, an accidental stowaway. The crew begins to bond with him, but Barnett soon learns that Michael inadvertently destroyed the CDRA, a device which scrubs carbon dioxide from the air on the ship.

Without the CDRA, they are forced to use emergency lithium hydroxide canisters to scrub CO2 from the air. However, the canisters can only sustain enough oxygen for two passengers. Barnett orders David to cultivate his algae on the ship rather than at the Martian colony as planned. Only half of the algae survives, providing just enough oxygen for a third crew member. Without another oxygen supply, the crew of four will asphyxiate before reaching Mars.

Barnett asks mission control for a solution that will save all four passengers, but the only option – an untested EVA operation to climb the tethers and recover liquid oxygen from the launch vehicle – is deemed too risky. Barnett and David come to terms with sacrificing Michael, but Zoe convinces them to wait ten days for mission control to think of a solution.

After three days, David explains the situation to Michael and offers him a painless lethal injection. Michael nearly takes his own life, but Zoe convinces him to hold out for a while longer. She insists on climbing the tethers to retrieve the liquid oxygen. David reveals that the rest of the algae has died, leaving only enough oxygen for two, and agrees to join her.

Zoe and David perform the EVA and fill two tanks, which would be enough to sustain two more passengers. However, deadly radiation from a high-energy solar flare forces them to leave one of the tanks behind.[5] They make it back to the ship, but Zoe accidentally drops the first tank, which drifts away into space. Meanwhile, the other tank is slowly leaking oxygen.

After regrouping, the crew realizes that one person must retrieve the second tank so the other three can all survive. Michael, David, and Zoe all volunteer to make the sacrifice, but Zoe ultimately insists on doing it herself. She manages to fill and return the tank to the ship before succumbing to radiation poisoning. She spends her final moments outside the ship, gazing at Mars amongst the stars.