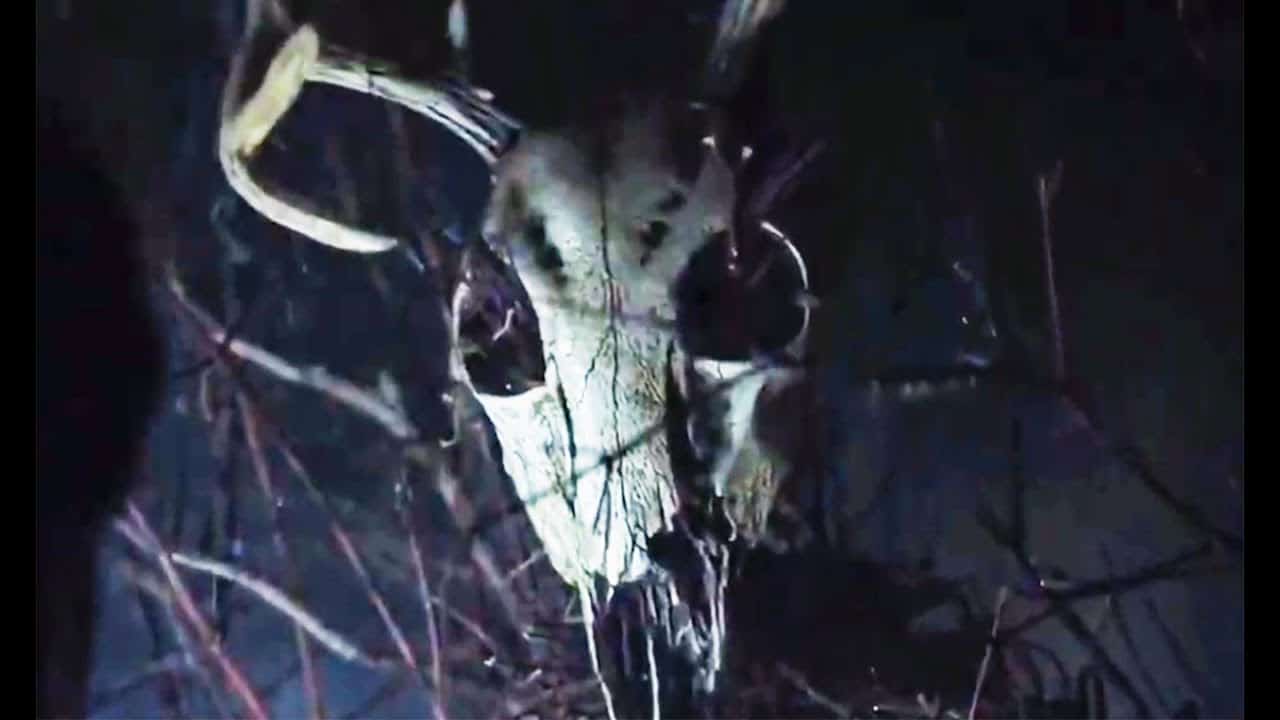 [ THE WRETCHED ] In 1985, Megan arrives at the home of the Gambels to babysit their daughter Ashley. In the basement, she finds an inhuman creature feeding off little Ashley. Terrified, she tries to escape, but Mr. Gambel purposely shuts the door on her. A strange sign is shown on the door.

In the present, Ben Shaw comes to live with his father Liam as his parents are in the middle of a divorce. Liam gives Ben a job working at the marina, where he befriends Mallory. During his shift, he notices Liam kissing a co-worker named Sara. In the woods, Dillon, the son of Liam’s neighbor Abbie, finds a tree with the same symbol seen at the Gambel house. He hears what sounds like Abbie’s voice coming from the tree, calling to him before Abbie appears. They bring a buck home that they hit, and later that night, something crawls out of the buck’s corpse.

Ben investigates strange noises he hears on the roof. He follows the sounds to Abbie’s house, but all he finds is an animal. He catches a glimpse of a witch on the porch, but cannot be sure what he saw due to Abbie’s husband Ty turning on the porch light. Ben befriends Dillon and makes him promise to tell him if he sees anything strange around his house. That night, Abbie goes to check on her infant son Sam (Dillon’s younger brother) in his crib. However, she finds that he disappeared, replaced by a bundle of sticks. She is then attacked by the witch. Ben later notices Abbie walking into the forest with a child.

Ben returns home one night to find Dillon hiding in his house, claiming that there is something wrong with his mother. Abbie comes looking for Dillon, threatening Ben and attempting to get into the house. Ty comes and takes Dillon home. Dillon tells Ty that Abbie is acting weird, but Ty dismisses his concerns. Ben is also concerned that something strange is happening with Abbie. At work, Ben learns that Dillon never showed up for his sailing lesson. When he goes to Dillon’s house, Ty denies that he has a son. Later, Abbie whispers something demonic to Ty that makes his ears bleed. She then takes a shower and her body starts to decay.

Ben is suspicious and reads about a witch that is known for possessing people and “feeding on the forgotten”. He confides in Mallory, but she does not take him seriously. She slips a taunting note under Abbie’s door. Ben sneaks into Abbie’s cellar and finds a picture of the family with Ty’s face scratched out, along with a picture of Mallory and her sister Lily. He realizes that the witch is after Lily next. He calls Mallory to warn her that Lily is in danger, but Mallory does not remember her sister. Ben rushes to save Lily, but is too late, as the witch has pulled her into her tree. He is knocked out after hitting his head on a rock. Upon returning home, he finds that Liam has called the police due to Ben being missing. Ben attempts to explain what is happening with the neighbors, but is accused of being on drugs. Ben confides in Sara but notices flowers decaying, and realizes she is possessed by the witch. When she tries to attack, he slashes her arm, but the witch makes it look like he attacked Sara for no reason. He is taken into custody. Ben sees Sara whispering in the officer’s ear. He tells Liam that Sara is possessed and pleads with him to check the neighbors’ cellar. Instead of taking Ben to the station, the officer attempts to drown him at the beach until a dog attacks. The officer shoots the dog and then himself as he realizes that something is controlling him to kill Ben. Meanwhile, Liam finds the dead bodies of Ty and Abbie at their house. Sara attacks Liam and is nearly about to kill him, but Ben arrives and shoots her with the officer’s gun. The witch crawls out of Sara’s corpse and goes after Ben, but he takes Liam to safety as their house burns down. As a picture of Ben and his family burns, Ben suddenly remembers that he has a little brother, Nathan, implying the witch had made Ben forget about him.

Ben and Mallory go to the tree to rescue their siblings. As Ben rescues Nathan and Lily, Liam arrives and rams his car into the witch. Afterwards, Ben and Nathan are leaving to return to their mother’s house. Liam says he will stay with his brother while he heals from the witch’s attack. Ben and Mallory kiss goodbye, and she puts a flower in his hair before leaving to give sailing lessons. Ben notices the flower is fake, implying that the witch is alive and now possessing Mallory, who is alone with three children.