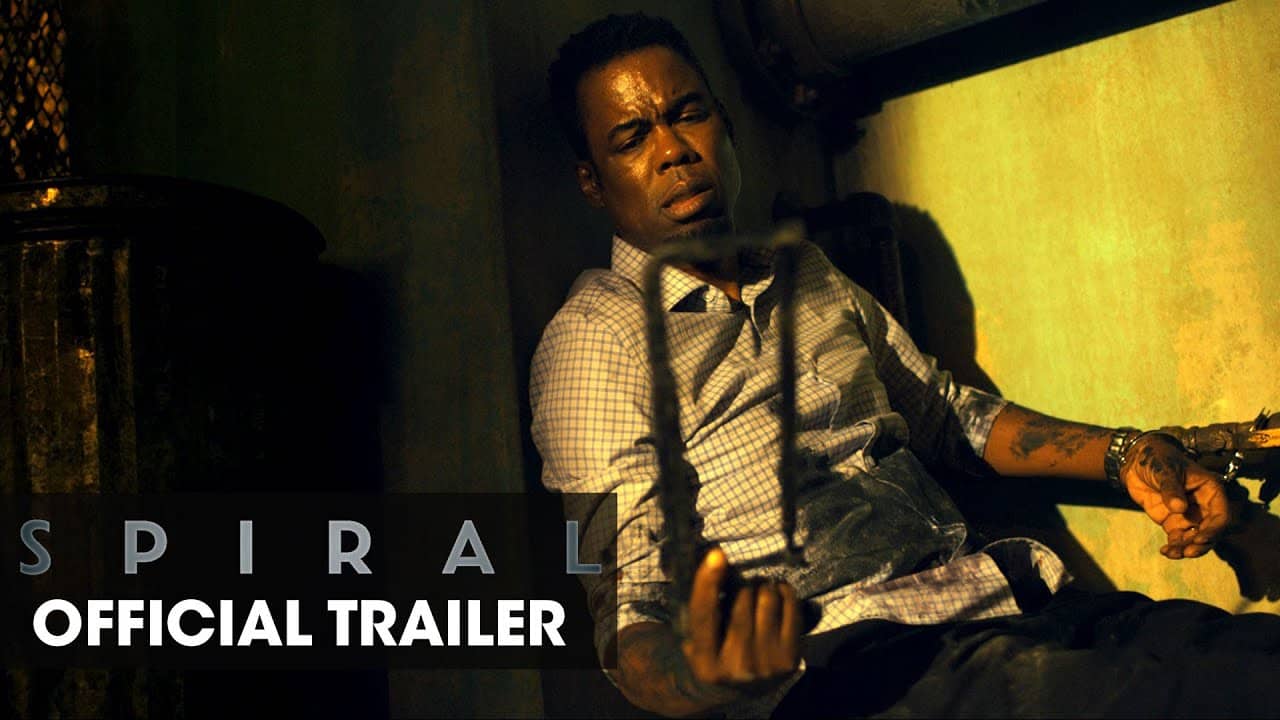 [ Spiral: Saw ] During a Fourth of July parade, an off-duty cop, Det. Marv Bozwick, chases a thief down a sewer drainage pipe. Attacked from behind by a figure wearing a pig mask, Bozwick wakes to find himself suspended by his tongue in an active subway tunnel and is given a choice via recorded message: tear out his tongue and live, or remain until the next train arrives, killing him.

Unable to escape the trap in time, Bozwick is hit by the train and killed. The next day, police Capt. Angie Garza assigns Det. Ezekiel “Zeke” Banks a new partner, idealistic rookie William Schenk. Banks and Schenk investigate Bozwick’s death and Banks realizes this to be similar to the now deceased Jigsaw Killer.

Meanwhile, a homicide detective named Fitch – who several years prior had ignored a backup call from Banks, resulting in him nearly getting killed – is abducted and placed in a trap where he must rip his fingers off to avoid electrocution in a filling water basin; he also fails to escape and dies.

Some officers begin to suspect that Banks may be responsible, due to his history with Fitch. A box then arrives at the station, containing a pig puppet and a piece of Schenk’s tattooed skin inside.

A small vial inside the box directs the police to a butcher shop, which was previously a hobby shop where Banks and his father, retired chief Marcus Banks, would go. Upon arriving, the team discovers a tape recorder and a skinned corpse, identified as Schenk.

Deciding to track down the killer himself, Marcus travels to a warehouse, where he is abducted. Shortly afterwards, Garza is kidnapped, and placed in a trap in the precinct’s cold storage where she has to sever her spinal cord on a blade to stop hot wax flowing from a pipe onto her face; she manages to successfully do it but dies of her injuries due to the boiling hot wax, with her body found by Banks.

While chasing a lead, Banks is captured and wakes up at the warehouse, handcuffed to a pipe with a hacksaw nearby. He considers sawing off his arm, but is able to escape using a loose bobby pin. He then discovers Peter Dunleavy, his former partner who was fired when Banks exposed a murder he committed, chained in place.

In front of him is a large glass-crushing machine, which has been modified to hurl shrapnel at him at high speed; a tape recorder explains that Banks can choose to either free him or leave him to die. Although Banks attempts to save Dunleavy, he dies from blood loss.

Moving to another room, Banks then finds Schenk, who is revealed to have faked his own death by using the skinned corpse of the thief who lured Bozwick into the tunnels, and has been the copycat all along. He explains that he is actually Emmerson, the son of the person Dunleavy murdered, who was shot because he had agreed to testify against a dirty cop. He also reveals that Marcus, during his time as chief, deliberately protected corrupt officers (including Garza) in order to “clean” the streets of crime more efficiently under Article 8.

Believing that Banks can be an ally, Emmerson presents him with a final test, revealing Marcus restrained in the air and slowly being drained of blood.

Emmerson calls 9-1-1 and claims that he is a civilian being pursued by a shooter, resulting in the dispatcher sending a SWAT team to his location. He hands Banks a revolver with a single bullet, and offers him the choice to either use the last bullet to shoot a target that will save Marcus but allow Emmerson to escape, or to kill Emmerson and let his father bleed to death.

Banks decides to shoot the target to save Marcus, causing his restraints to loosen and lowering him to the ground, and then begins to fight Emmerson.

Shortly after, the SWAT team arrives and inadvertently triggers a tripwire, causing Marcus’s restraints to yank him upward again. A gun is revealed to be affixed to his arm as restraints pull it upward resulting in the SWAT team killing him. Banks screams in anguish as Emmerson escapes.